"Lions and Tiger and Bear Oh My... By Marshall Schmitt

“Lions and Tigers and Bears oh my….”
By Marshall Schmitt 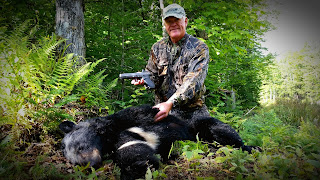 To my left at 9 o’clock I heard the unmistakable sound of a breaking stick. Although it could be anything, the words of my guide the day before at the hunters meeting echoed in my ears. “Remember a bear is a predator and he is in no hurry. You have to be a better predator… you have to remain motionless and not make a sound. A bear will wait until he is sure of his surroundings and that nothing is wrong before he approaches the bait.”


Seventeen feet up and twenty three yards from the bait strategically placed to give me a quartering away shot I braced my G40 Gen4 on my knees with a two handed hold.  I could feel my heart rate rise and took a deep breath. I was ready, or so I thought. 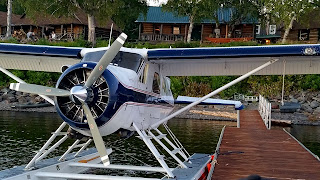 I caught some movement out of my left peripheral vision and slowly lowered my head instead of turning… a trick I learned from a Secret Service VIP protection class I took in my other life. By lowering my head I was able to increase the angle of my peripheral vision and was able to see a mature Boar Black Bear approach from my 7 o’clock position moving my direction and destined to go right under me. I couldn’t move as any attempt to do so on the metal ladder stand would have produced noise and I would be busted and the bear would likely never return to the site again. I remained motionless for about 12 minutes until the squirrels and birds began moving around again and I knew the bear had continued on the same path I had approached the stand on.


Hunting with a handgun requires some thought to include consideration of what you are hunting. My choice this fall was Black Bear with a GLOCK G40 and Trijicon Modular Optic Sight (MOS). Wanting to enhance my chances of success I researched several possibilities settling on OMM Outfitters at Eagle Lake, Maine through Cabela’s Hunts. The President and Lead Guide is Nathan “Nate” Theriault. There were 8 hunters for the second week hunt in September that I was on. We stayed in comfortable rustic log cabins by Eagle Lake. 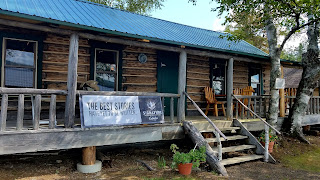 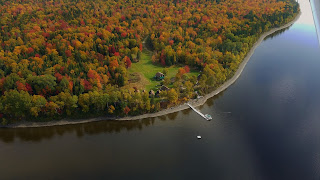 The next morning I went with a guide to shoot my G40 at 25 yards. I had practiced for months prior to the hunt to ensure it was sighted in and I was competent to shoot it. I had practiced at ranges out to 50 yards but in that I was shooting a bear which has a thick hide, heavy bones, fat, and muscle mass to go through I really wanted to limit my range to about 25 yards. Three shots with a one and a half inch group with Buffalo Bore 180 grain JHPs satisfied the guide.  I selected this round because they are hotter than most rounds designed for law enforcement, personal protection or sport shooting. They are advertised at 1350 fps out of a 5” land and groove handgun barrel. I suspect they are traveling even faster out of my G40 due the legendary cold hammer forged 6.02 inch hexagonal profile barrel. The design gives a closer bullet to barrel fit so bullets tend to travel faster than in a barrel with lands and grooves. Also I was sporting an extra inch of barrel length which adds to the velocity.

When choosing to go for bear the G40 was a natural choice. It is the rough ballistic equivalent to a 41 magnum. In testing the G40 previously Chris Edwards, of GLOCK Professional, found the inherent accuracy to be outstanding capable of a 2.54 inch group at 50 yards. My shooting with a rest confirmed I could consistently shoot 1.5 inch groups at 25 yards with the Trijicon RMR and full bore loads.


I heard a branch break again about an hour later to my left. This time instead of lining up on the bait with my sights I slowly turned sideways and waited. Several minutes passed and then silently a bear appeared where I was looking. I quickly sized up the bear to ensure it was a mature black bear and once that was determined I waited until the bear stopped about 7 yards from the base of the tree my stand was on. With both eyes open I was able to put the red dot sight in the center on the spine with what I believed was the correct angle down to the vitals. I fired… ready to place a second shot on target the medium Beavertail Modular Back Strap holding the recoil down… it wasn’t necessary. The bear dropped straight down and it was over.


My bear was a good mature representative of the species. Later we were able to determine the round did go through the spine and a rib, penetrated all the way down, and created a 9 mm hole into the heart which in a bear is located very low in the chest cavity. That is stopping power. I had a cooler full of meat to take home and an area Taxidermist is doing a front Shoulder mount.


Things to consider for a handgun hunt:


·         Know your game-for bear scent is one of the biggest issues. I used Camouflaged Scent-Lok clothes. Know where the vitals are located from a variety of angles including elevation.


·         Know your gun and your limitations. Match the caliber and bullets to get the penetration and expansion you need.

The Author is a retired from the Kansas Bureau of Investigation and currently a Firearms Instructor for GLOCK Professional in the Northeast United States teaching Armorer and Instructor Workshop Classes. Nate’s chosen sidearm when tracking bears for his clients… a Rough Texture Frame GLOCK 22 with tritium sights and a rail mounted light.
at 10:43 AM No comments: