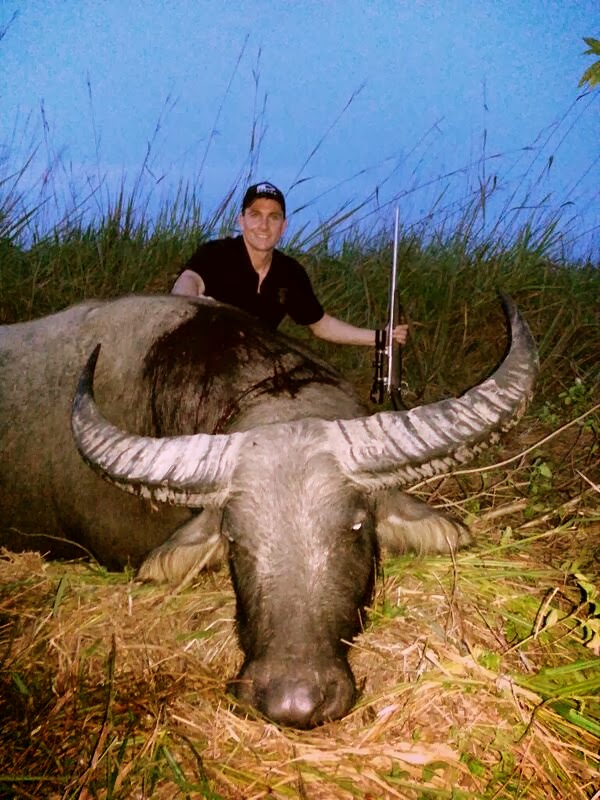 New places are something of mystery. The vistas, smells, culture, language and food are just a few of the exciting aspects of visiting new places. This 10 day trip took me over 9,000 miles across the Pacific Ocean and 500 miles by vehicle to explore and study and hunt the great Asiatic water buffalo.

According to various web sites, this species of buffalo (Carabao) was introduced to PNG as a domestic animal by the Germans prior to World War I. It was resistant to tick fever which was inflicting the cattle. Coconut plantations used them as draught animals. Today the meat from the buffalo, along with feral pigs and Rusa deer, feed entire villages - each part of the animals is consumed or utilized. The hunt for Buff is conducted in a 20 square mile lowland grassy region South West of Wewak the capital of East Sepik, PNG.

Upon arriving I was hit by a surreal feeling of excitement and adventure, and a time change. I was now 15 hours ahead of east coast time. The smell was different, the weather was hot and muggy, and the people very unique and interesting. The first day was spent at an elegant tropical hotel owned by Chinese people and a short distance from the airport. A great place to re-charge after days on my feet at the SCI Convention and a transcontinental trip.

Driving is reversed with the steering wheel on the right side and travel on the opposite side of the road from the US. My driver wasn’t crazy after all; he was only driving legally and not trying to play a fun game of chicken! It was going to be an exciting trip and an adventure of a lifetime to an extreme destination.

Once at the camp location, photographer Jereme Thaxton and I become distant from our once comfortable way of living and the hotel amenities. Taken back by our primitive camp consisting of a bamboo frame with a tarp over the top to keep the rain off we began settling in. Our washing and bathroom facility was also much of the same only the shower was separate from the bathroom and had a frame with a tarp around it. The toilet was a dug out hole with unique, authentic fauna and flora walls. Our surrounding was a tropical rain forest with the sounds of exotic birds and the smells of rain-forest flowers.

The camp staff consisting of two village women, Sophia and Antonia, made this outpost home for us. They also brought the fruits of their gardens consisting of pineapple, bananas and vegetables grown in their village of about 150 people. They spoke spotty English. PNG has an extraordinary number of spoken languages making it one of the most linguistically diverse places on earth. Our PH spoke the village’s common place language called Tok Pisin. Every aspect of the hunt would bring a feeling of being in the wild, wild west.

Our Australian outfitter had rented a new 4 door diesel, Toyota Hilux for this hunt with, of course, the steering wheel on the right! Our adventure would start out each day by driving numerous logging roads in search of our first buffalo sighting. We spotted many in this game rich area. 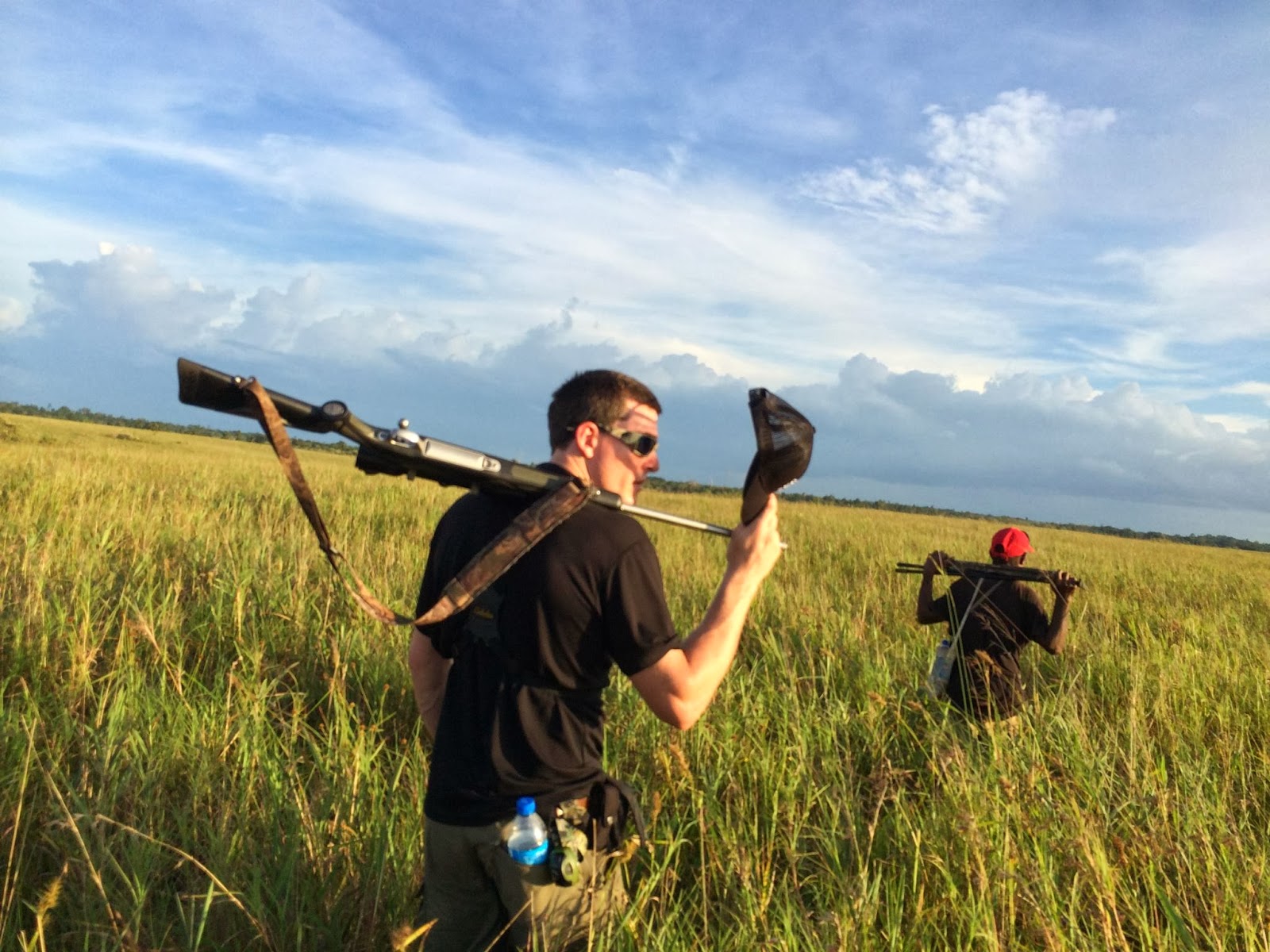 The conditions for the hunt were hot and muggy with lots of biting and poisonous critters. The average temps of 90 plus degrees and high humidity made traversing extremely difficult. Terrain consisted mainly of grasslands with the occasional cut through the tropical rain forest. We walked many miles through the grasslands and forest in pursuit of the buffalo. The buffalo trails through these areas were highways cut deep into the earth’s surface. Most of these trails lead to low outcroppings with water to wallow in for cooling from the day’s hot sun. 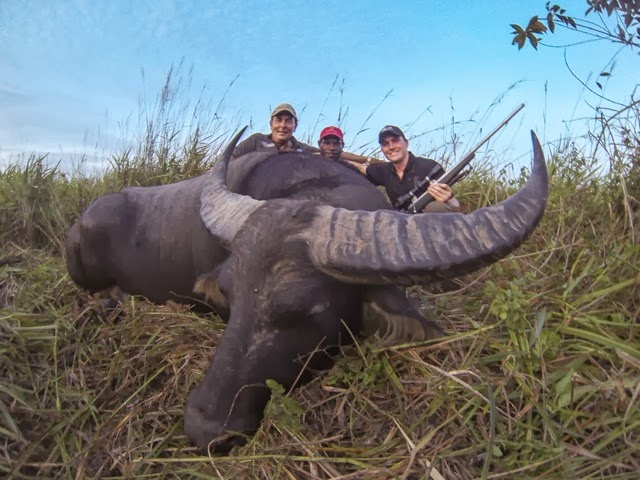 On the third day of the hunt the native lead tracker spotted a great looking animal from his perch on the back of the truck. The stalk began as we checked the wind and proceeded into the 6ft high grass. By the time we found the trophy bull it had found us.

The feeling of safety in the tall grass made it stay put. This lasted for a short time, enough time for us to set up for a shot as it began to trot up the hill in front of us. It stopped at about 75 yards, turned and I fired. Hearing the 375 bark and the smack of the bullet I chambered another round. The wounded bull was on the run at this point. I fired another round and hit it again. The bull worked away from us and back into the deep grass. We waited briefly and then took chase finding blood quickly. This chase became scary fast. I spotted the bull on the move one more time and wasn’t able to get a shot off. I turned to the outfitter and asked “what next”? He looked at me and his exact words were, “This is dangerous as hell man"!? This registered with me for an instant and then I was on an adrenalin fueled search with the lead tracker. He found a small crab tree to climb and quickly spotted the beast. Climbing up the tree I could see that a generally docile animal was crouched in the grass facing us and waiting for an opportunity to charge. I steadied on a branch with my 375 and fired another round into the charge-ready animal. At the shot he stood and instantly fell down. The tracker and I then descended the tree and we all cautiously moved toward the massive bull. When we approached it stood up and I quickly shot at a distance of 10 yards. At that shot it dropped! This happened once again and after a total of 6 shots the beast finally expired and we were safe. What a hunt! 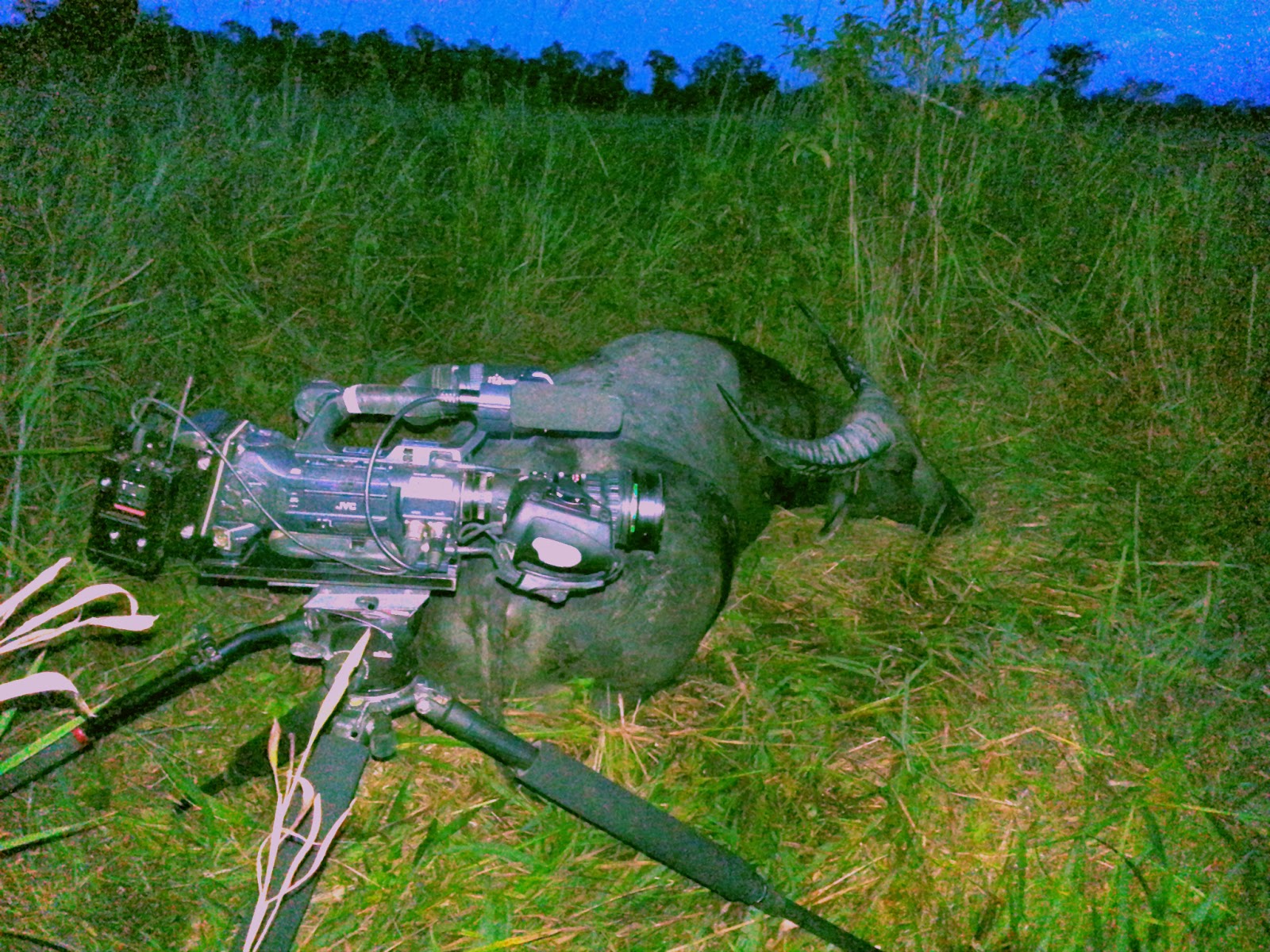 This was truly an adventure, from the camp we stayed in to the food, insects, snakes and spiders and the life threatening stalk. We never knew what the next day had in store only that it would take determination and drive to continue on. In addition to the satisfaction from meeting many new friends, this trip left me feeling and understanding how blessed I am to live in such a great country. Also by observing the unique native culture, I appreciate what it’s like to not need or want for any more than what is available and to cherish family and friends more than material possessions.
at 5:14 AM

Email ThisBlogThis!Share to TwitterShare to FacebookShare to Pinterest
Labels: Adventure